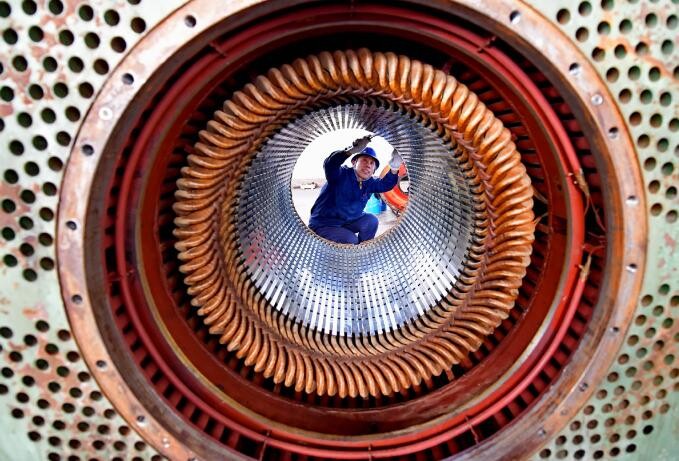 A technician works on the production line of a machinery company in Luannan county, Hebei province.

Activity in China's manufacturing sector increased at a faster pace in March, rising into the expansion territory, adding to confidence in the recovery of the world's second-largest economy.

Analysts said the rise is attributable to seasonal and other factors and it is still too early to predict a full rebound in manufacturing activity.

The purchasing managers index for the country's manufacturing sector came in at 50.5 in March, up from 49.2 in February, the National Bureau of Statistics said on Sunday.

A reading above 50 indicates expansion, while one below it reflects contraction.

The manufacturing PMI had been below the 50 mark for three consecutive months before it surged into the expansion territory in March.

Manufacturing activity recovered and accelerated in March, following the disrupted economic activity during the weeklong Lunar New Year festival in February. The subindexes for both production and new orders respectively rose to a six-month high of 52.7 and 51.6.

"The rising readings also indicate the country's policies supporting the real economy, including simplifying administrative procedures and tax and fee cuts, which have gradually been implemented, are leading to recovery on both the supply and demand sides," senior NBS official Zhao Qinghe said in a statement.

Strong growth in emerging industries, such as high-tech and equipment manufacturing, contributed to the rising PMI in March, Zhao said.

Rising prices in some sectors, such as oil processing, have also contributed to the rising PMI, he said.

The manufacturing PMI rises above the 50 mark mainly because a seasonal rebound of activity after the Lunar New Year holiday, said Li Chao, an analyst of Huatai Securities. "It could weaken in April."

"Apart from the seasonal factor, the rising manufacturing PMI also indicates that China's policies bolstering growth have started to take effect," said Zhang Liqun, an economist at the Development Research Center of the State Council. "The index shows that the confidence of corporate managers and operation of enterprises are recovering."

Li of Huatai Securities also said that compared with domestic demand, China faces a harsher situation on the export front.

The subindex for new export and import orders respectively stood at 47.1 and 48.7, both below the 50 mark, indicating easing growth of the world economy.

Despite the external challenge, Bank of China economists said in a report released on Thursday that as the effect of the country's supportive policies starts to surface, the world's second-largest economy may stabilize, with its GDP growth picking up to 6.3 percent in the second quarter from 6.2 percent in the first.

The NBS also said on Sunday that China's non-manufacturing PMI rose to 54.8 in March, up from 54.3 in February.

The subindex measuring business activity in the service industry stood at 53.6, up from 53.5 in February.

The composite PMI, which covers manufacturing and services activity, rose to 54 from February's 52.4, according to the NBS.