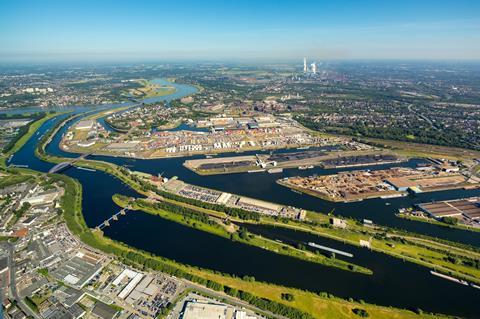 GERMANY: The Coal Island facility at the inland Port of Duisburg is to be replaced by a rail, river and road intermodal terminal in a change which operator Duisport said reflects a ‘sharp decline’ in the coal market but ‘booming’ trade with China.

The Duisburg Gateway Terminal is expected to become a key European hub for Eurasian rail traffic when it opens in 2022. Duisport said 30% of rail freight between China and Europe already passes through Duisburg, and the current 35 to 40 trains per week to 12 destinations in China is predicted to increase to 100 eastbound trains per week.

The Duisburg Gateway Terminal will also handle rail services to and from eastern and southeastern Europe as well as inland waterway traffic to seaports, taking throughput to 850 000 TEU/year.

‘We are proud that we have been able to acquire internationally operating partners for the realisation of this outstanding project with international appeal’, said Duisport CEO Erich Staake.

‘We are reacting to the changing market and are building Europe’s largest container terminal in the hinterland’, Staake explained. ‘We are consolidating our leading position in Chinese trade, creating jobs, and strengthening Nordrhein-Westfalen as the most important logistics location in Europe.’